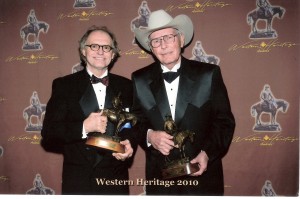 Lunacy Records is proud to announce that Lunacy artist LeRoy Jones along with producers Terry Scarberry and Dave Copenhaver were awarded the very prestigious “Wrangler” Award at the 49th Annual Western Heritage Awards held this past April at the National Western Heritage Museum.  LeRoy’s song “The Great Western Trail” from his Lunacy CD “Looking Back” was chosen “Outstanding Original Composition” for 2009.

For those not familiar with the “Wrangler” Awards, it is a national award given by the National Western Heritage Museum for outstanding contributions to the Western arts in the fields of literature, film, and music.  Some of this year’s other honorees include Charlton Heston, Tom Selleck, Don Edwards, and Bob Moorehouse.  Past honorees include everyone from John Wayne to Red Steagall to Louis L’Amour.  So as you can imagine, it was quite a night for Lunacy Records. In attendance representing Lunacy Records were LeRoy & Sandra Jones, Ron & Linda James, and Dave & Melissa Copenhaver.   It is a great honor to take home a “Cowboy Oscar.” 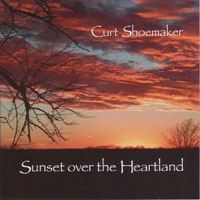 Curt Shoemaker – Sunset Over The Heartland

Kansas steel guitar legend Curt Shoemaker has his fourth CD out on Lunacy Records.  “Sunset Over the Heartland” is now available.  Curt continues to push the boundaries of traditional pedal steel guitar playing.  This time out Curt has put together 10 songs ranging from Western swing, to country ballads, a polka, and a couple of stand out originals.  As of this writing we have received word that Curt’s original song “Sunset Over the Heartland” has gone to #1 on a couple of Internet radio charts.  Congrats Curt!

One of the standout cuts on the CD “Vincent” (Starry, Starry Night) seems to have taken on a life of its own on “You Tube”.  A live in the studio video featuring great performances by Curt and guitarist Terry Scarberry seems to have caught the eyes and ears of steel lovers around the world.  (Lunacy Records 7 on You Tube.)  Working with Curt on the CD all the usual suspects.  Terry Scarberry-guitars, Dennis Borycki-keyboards, Steve Short-drums, and Dave Copenhaver-bass.  Enough can never be said about this rhythm sections ability to adapt to every artist that walks through the doors of Lunacy Records.  These guys make it happen!  Curt will be touring through the Midwest all summer so be on the lookout and pick up any of his four Lunacy CDs (“The Shoe”, “Mega-Steel”, “Gathered in His Name”, or the latest “Sunset Over the Heartland”.  Wow what a catalog!!!

Rainy Day, an acoustic based group featuring J. Maxey and Trey Livingston have been tracking at Lunacy and have released a vinyl LP “The Winter Album” on Chemical Wire records.  A second LP is in the works.  It’s great to know vinyl lives,love those album covers.  “The Winter Album” by Rainy Day available at record stores near you. 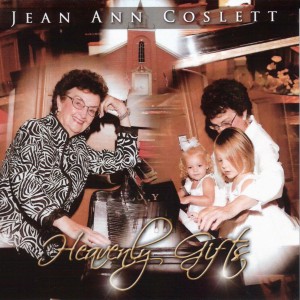 Legendary pianist Jean Ann Coslett has a new solo piano recording out on Lunacy Records.  Jean Ann has been a fixture on the Oklahoma music scene for many, many years and has played with a musical who’s who.  Her new CD titled “Heavenly Gifts” showcases her many different styles and gives credence to why she is truly an Oklahoma musical treasure.

Chad Todd has finished tracking 5 songs and is currently working on 5 more for a fall release on Lunacy.  Out of the first 5 Chad has already charted 2 songs on the Internet radio one of which “The Void” written by David Anthony stayed at #1 on “Our Stage Radio” for several weeks.  The Lunacy Team of Terry Scarberry-guitar, Steve Short-drums, Dennis Borycki-keys, and Cope-bass with Dean McCoy-steel, and Gary Howe-fiddle once again came through to create a piece of work that stands up on a national level.  Chad is currently working the Oklahoma circuit and always gives a great show.  Be on the look out for “The Chad Todd Project”.

It’s a little late for this season, but it always comes back around.  The Rodeo Opry released a great Christmas collection that was recorded at Studio Seven.  This CD features too many artists to list with each artist contributing one song.  It contains all your favorites plus several surprises.  If you have never visited the Rodeo Opry you owe it to yourself to check out one of the Saturday night shows.  The show changes every week and features a wide variety of entertainers and musical styles with one thing that is always constant – quality entertainment.  The Christmas CD is available at the Rodeo Opry pick one up when you go out to the Saturday night show.

Lunacy artist Greg Mainus is back in the studio working on a new release.  Greg and the Lunacy crew have teamed up once again to create some of the best tracks he has ever done.  A couple of the tracks seem to have great commercial potential.  “Redneck Mexico” is one of those rockin’ summertime songs that many artists have built their careers on and “Threw it All Away” can only be described as a gut wrenching ballad.  Greg and his big bull frog voice along with the Lunacy Crew are really on to something.

Just a reminder as you visit the Lunacy Records website, be sure to check out our YOUTUBE channel at LunacyRecords7 on YouTube.  You will find some very cool music videos of numerous Lunacy artists in the studio.  You won’t want to miss our youngest Lunacy artist three year old “IAN CHAVEZ” doing “Try It, You’ll Like It”.  Never too young to start at Lunacy Records!

Morris McCraven & Friends put on a tremendous show this past April at the OKC Arts Festival with the same in up they had at last year’s Jazz in June (Dennis Borycki-keys, Steve Short-drums, Don Juntunen-guitar, Dave Copenhaver-bass, Harold Jones-vocals, and Morris McCraven-sax.  These guys are really developing into a force to be reckoned with.  Video clips are available on YouTube LunacyRecords7.

Outflow is back in the studio working on what will be their first full length CD on Lunacy.  The players – Aaron Wake-guitar & vocals; Scott Williams-drums; Steve Brann-guitar; Brett Hull-bass have been together now for almost two years and play almost every week.  These guys are tight!  The CD will be all original songs written by the band.

R & B show band Shortt Dogg have completed recording and will soon have a new CD out on Lunacy Records.  Shortt Dogg is one of Oklahoma’s premier R & B groups and specializes in giving a very high energy show each and every time they perform.  That high energy aspect definitely translated in the studio.  This CD has the “serious funk” and also killer vocals.  Be on the look out for Shortt Dogg.  This is a great live act!

Oklahoma City classic rock group “Just Dig It” recently recorded a group of songs at Lunacy.The band features Pat Castleberry and Laura Castleberry on vocals along with multi-instrumentalists Dave Thomason and Bruce Eagle.Pat was a founding member of
“The Wise Guys”, and Dave and Bruce have been on the O.K.C. music scene for many years. “Just Dig It” will be performing throughout Oklahoma, be sure to catch them for a fun and exicting evening.

Thanks to everyone for sharing their music – have a great summer!