October 2010 marked a milestone for Studio Seven/Lunacy Records.  October 1, 1990 we were incorporated and began what is now a twenty year journey.  Through the years we have hosted many, many great artists and have been lucky enough to see countless careers grow and prosper.  The music has been as diverse as imaginable , not to mention the people and personalities.  When we started it was, “Ok, let’s try this for a while and see what happens.”  It  seems like yesterday.  That’s why they say, “Time passes fast when you’re having fun!”  Believe me, it’s been big fun and one hell of a ride.  On behalf of Ron, Gary, Lisa and myself thanks to everyone over the past twenty years for your help in keeping the music and the dream alive. 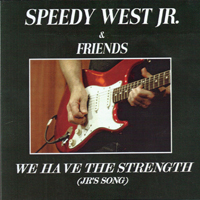 Sweedy West Jr. – We Have The Strength (Jr’s Song)

Lunacy is proud and honored to have hosted Speedy West Jr. recently.  As some of you may know Speedy is going through some health problems, but let me tell you his spirit is strong and his playing is as true as ever.  The project is a song called “We Have The Strength”(Jr.’s Song) and will be released with all proceeds going to help Speedy with his ever mounting medical costs.  Helping out on the recording is basically a who’s who of the OKC scene – just to name a few: Danny White, Joe Intrieri, Scarberry, Short, Cope, Steve Crossley, Steve Coleman, Anita White, Michael Summers, Jerry Wilson, Scott Keeton, Cara Black, Steve Wright and many more. The track also features a great horn arrangement by Jay Wilkinson.  This is a wonderful project for a great friend and a great musician.  Wishing you the best Speedy – we all love you! 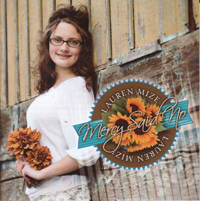 Christian artist, Lauren Mize’s new CD “Mercy Said No” is out on Lunacy Records.  Featuring standout tracks like “Morning’s Coming” and “Mercy Said No”, the CD is a great showcase for this fine young Christian vocalist.  Helping Lauren with the vocals are brothers Eric and Jonathan Mize along with Hannah Baker.  Also contributing to the project was Eddie Howard, drums; Terry Scarberry, guitars; Dennis Borycki, keyboards; and Dave Copenhaver, bass.  Lauren Mize and the Mize Family will be performing at many churches in the Oklahoma area.  Be on the lookout for this fine vocal talent.

Country artist Chad Todd has been back in the studio tracking five new songs to finish up his Lunacy Records debut.  Chad has brought in a fine collection of songs written by himself and a couple of other writers.  David Anthony late of George Strait’s band and writer of #1 hit “Something Special to Me” has contributed a beautiful ballad “Just for Me”.  Working with Chad on the project are the usual crew of Scarberry, Short, and Borycki plus Johnie Helms on steel, Greg Burgess on fiddle and the Russells on vocals. The CD will be out early 2011.  Chad is one of the hardest working artists in the OKC area and is playing somewhere throughout Oklahoma every week. Get out and see “The Chad Evan Todd Project” – a great live show. 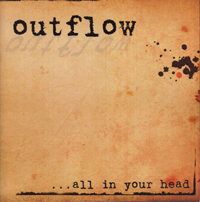 Outflow – All In Your Head

Lunacy Records is proud to announce the release of “Outflow…All in Your Head”.  This is one kickin’ CD!  Outflow features Aaron Shupert, guitar and vocals; Steve Brann, lead guitars; Brett Hull, bass; and Scott Williams, drums.  A couple of songs “Take Me Away” and “Now is the Time” are already making their way to radio.  Outflow is doing 6 to 8 shows a month.  Be sure to catch this act while you can because these guys won’t be local for long.

Congratulations to our great friend and Lunacy artist Les Gilliam on his induction to the Oklahoma Music Hall of Fame Class of 2010.  My wife, Melissa, and I were lucky enough to attend the induction ceremonies in Muskogee and Les made us very proud.  As always, Les’s professional demeanor and likable personality won the crowd over the moment he spoke.  Not only did Les and his “Silver Lake Band” featuring steel guitar legend Smiley Weaver, give a great performance, highlighted by the song “1955”, they backed up Grand Ole’ Opry star Jean Shepherd for her part of the show.  What pros!  Les Gilliam you are truly a treasure and we are blessed and lucky to call you a friend.  Congratulations!

Songwriter Joe Spain along with the “Armadillo Underground Band” featuring Cleve Warren, Dave Thomason, and Cope has been tracking songs for a soon to be released CD.  Joe’s song “1948” seems to really be striking a chord with the boomers.  He has nailed the lyric for our generation, everything from the night in 64, Buddy, Muddy and hot rods – it’s all there!  More on Joe and the Armadillo Underground Band later.

The Sullivan Family tracked a couple of songs at Studio Seven recently.  Matriarch Elizabeth Sullivan hosted Dr. Pat Sullivan, Tim Sullivan, Robin Brooks Sullivan and Montana Sullivan in what can only be called a vocal event.  Overdubs and post production will be done in California and overseen by Heather Sullivan.  The annual “Sullivan Family Concert” to benefit the Woman’s Resource Center, a United Way agency was held December 17th at the Catlett Hall on the OU Campus- a great show for a great cause!

The holidays may be past but be sure to pick up a copy of the new Rodeo Opry Christmas CD at your local Taco Mayo.  This CD features many Oklahoma artists, among them is Rock and Roll Hall of Famer, Wanda Jackson doing a song that will surely be classic.  It’s a great way to kick off your holiday season no matter what time of year it is.  Merry Christmas!!!

Also in the studio classical guitarist Roy Gonsalas is preparing a CD to be released in early 2011.

Thanks again for all your help and support.  Onward to the next 20 years!!